Reserves clinch Group B title with win on last game of season! 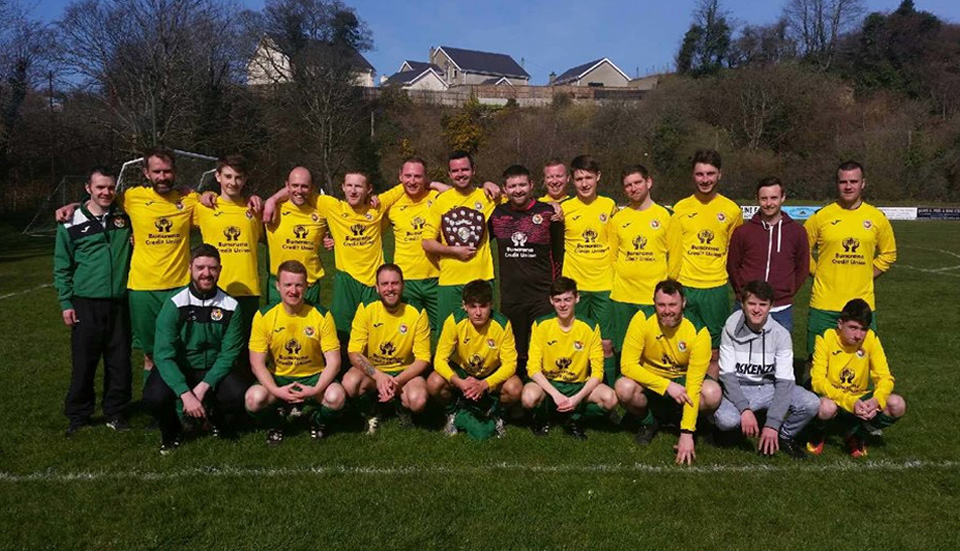 In bright sunshine both teams started brightly knowing that a win for Cockhill would mean they clinch the Group B shield and a win for Culdaff would keep their hopes alive.

It was Culdaff who first threatened to score with a when Martin Keddy hit a well struck free kick which was well saved by Gary Robinson.

However, Cockhill responded well and on 15 minutes they took the lead when a great through ball found Ryan Mallett in the far side of the box who squared it for Gary Brelsin to slot home from 10 yards past Callum Doherty to give Cockhill the lead.

Cockhill almost made it 2 on 20 minutes when a Gary Breslin header beat Doherty in the Culdaff goal but it was cleared off the line by Cathal McGrenaghan.

There were little chances for either team in the next 15 minutes or so until Tristan Donaghy latched on to a flick on from Gary Breslin who was unlucky not to score with his lob which landed just over the bar.

Culdaff had the last chance of the half with McGrenaghan but his shot failed to hit the target.

Cockhill started the second half on the front foot almost making it two within a minute of the restart. Keegan Hegarty played a great ball forward and under pressure Gary Breslin fired over the bar from just inside the box.

Culdaff responded well and put Cockhill under some pressure with Gary Robinson having to come off his line quickly to make a good save at the foot of Keddy.

On 65 minutes Cockhill were reduced to 10 men when Ryan Mallett was given a straight red card.

Cockhill regrouped and made a few changes shortly after bringing on Eddie Cuffe and Jude Mullan to tighten things up and give Cockhill some fresh legs now down to 10 men.

Despite being down to 10 men the Cockhill players rose to the challenge and shortly after coming on Eddie Cuffe crossed the ball which found Andy McElhinney at the back post who fired home to give Cockhill a two nil lead and a bit of breathing space being a man short.

Culdaff with the man advantage and having to win to keep their hopes of winning the group alive pushed forward bringing on a number of subs and pushing more men forward and put Cockhill under some pressure towards the end.

One of the subs Niall McLaughlin was very unlucky not to score with a great effort on goal but Cockhill’s keeper pulled off a great finger tip save to maintain Cockhill’s two goal cushion.

Culdaff again pressed and this Cockhill’s Barney Gubbins was in the right place at the right time to clear off the line from a shot by McGrenaghan.

Despite tiring and being a man short Cockhill were still creating chances and almost put the game to bed on 88 minutes when Paddy McLaughlin teed up
Ryan Duffy who lobbed the on rushing Doherty but saw his effort bounce off the bar.

However, that was enough for Cockhill to see the game out and clinch the Reserve Division Group B title with another fine and very hard fought win to end the season on a high.