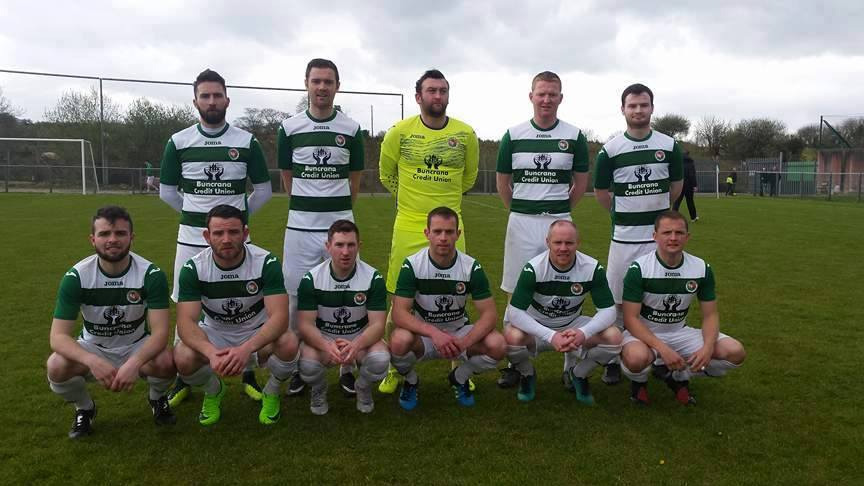 The Rovers captain struck his 10th and 11th League goals of the season to bring Eamon McConigley’s team to within three points of leaders Cockhill.

With three games to go, Cockhill remain in the driving seat, but Gavin Cullen’s side has run out of wriggle room after being undone here by McElwaine’s brace.

Cockhill had led from Gerard McLaughlin’s header in the 52nd minute, but the champions finished with 10 men as McLaughlin was sent off four minutes from the end.

As the teams parted ways at the conclusion, Cockhill voiced their displeasure at referee, Marty Quinn. McLaughlin was shown a straight red card for his part in an off-the-ball incident involving David Shovlin in the 86th minute.

Shovlin went to ground as the teams lined up awaiting a kick-out from Cullen and McLaughlin was given his marching orders. Cockhill protested his innocence vociferously after falling to a fourth defeat of the season.

That statistic is startling considering that, when they fell to a loss against Swilly in January, it was their first defeat in a 72-game stretch going back to the summer of 2012.

The figure does, however, include a 3-2 loss to Derry City that was subsequently turned in their favour by the USL as Derry had been found to have been in breach of a rule that governs the amount of senior players they can play.

That boardroom decision now appears as if it will have a crucial swing in the title race after Rovers did what they had to do this afternoon and, in a deluge at the Charlie O’Donnell Sports Grounds, have made the title tilt a lot more interesting than had seemed a few weeks ago.

Cockhill led seven minutes into the second half when McLaughlin headed home at the near post from a Gerry Gill corner.

However, Rovers equalised 11 minutes later when McElwaine collected a scooped pass from Shovlin and placed his effort beyond player-manager Cullen.

And the Cathedral Town side had the lead soon after. With the ball bobbling awkwardly in the area, McElwaine managed to get a touch and the ball cannoned in off the bar.

It had been a game of little incident before McLaughlin broke the deadlock.

Mark Moran shot over from the edge of the D early on while McLaughlin nodded wide from another Gill deliver with Oisin McColgan side-footing wide as Gill’s corner wasn’t dealt with.

Letterkenny felt their way into the tie and Christy Connaghan stung Cullen into action with a fierce drive that the former Harps netminder did well to get down on.

Another low teaser from Connaghan drew a save from Cullen.

A win here for Cockhill would have taken them to within a point of the silverware and they sensed something when McLaughlin broke the deadlock.

But Letterkenny, led by the experience and guile of McElwaine, had other ideas – and their message was that they won’t give up without a battle.

For them, though, there is a very real sense of the ‘what might have been’ about their feelings towards a few poor results around the season’s mid-point – but the race hasn’t quite been run just yet.