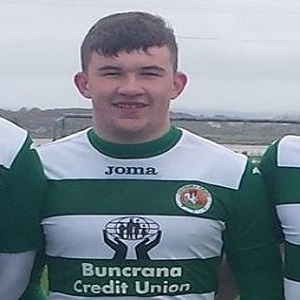 The visitors had the first chance when a Kevin McDaid long range effort was well held by Shaun Friel. At the other end Declan McLaughlin beat his man and crossed for Matthew McLaughlin whose header landed on the roof of the net. On 20 minutes Matthew McLaughlin got on the end of a John Grant shot and deflected it goalwards but Declan Caldwell saved well. Cockhill responded and Friel tipped a Michael Owen Doherty effort over the bar before Darragh McDermott dragged an effort wide when well placed. McDermott broke the deadlock on 35 minutes after he converted a Keegan Doherty cross from the right from eight yards. Rasheney’s Anthony Doherty then had a shot blocked but Damien Friel’s follow up was straight at Caldwell. Cockhill then went two up before the break when McDermott blasted a penalty down the centre after Doherty had been upended. Rasheney dominated the opening period of the second half with John Grant and Matthew McLaughlin firing just wide before Damien Friel saw an effort crash off the bar. On 70 minutes Friel hen hooked just wide from ten yards. In their first threat of the second period Cockhill increased their lead when Michael Owen Doherty (pictured) converted McDermott’s cross to seal the tie. Rasheney responded and substitute Paddy McGilloway had an effort tipped over the bar while Michael Toland was just off target. Cockhill substitute Mike Doherty saw an effort clip the bar while on 88minutes after the home defence failed to clear Daniel Martin Doherty poked the ball home