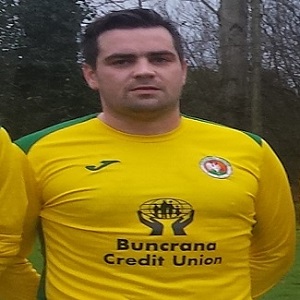 In the opening exchanges Darragh McDermott for the home side fired wide while at the other end Philip McGuinness was clean through but failed to hit the target. Cockhill broke the deadlock on 22 minutes after Mark McDaid’s cross was dummied by Michael Owen Doherty for Daniel Martin Doherty to shot low to the corner. Dunree got back on terms from the penalty spot after 37 minutes when Tommy Doherty fired past Sean Parker. In the opening minutes of the second half Michael Owen Doherty saw his effort turned onto the post by Roger McGilloway. The home side regained the lead on 65minutes when Darragh McDermott beat the offside trap before rounding Parker to slot home. On 70 minutes Cockhill increased their lead after a corner was played to SP Fullerton (pictured) twenty five yards out and he fired a stunning outside of the foot effort to the top corner. Cockhill were rampant now and McDermott scored with a superb lob from twenty yards before after good build up play McDermott rounded McGilloway to slot home and complete his hat trick. The final goal came on 83minutes when Michael Owen Doherty released Shay McLaughlin and the young winger finished superbly.