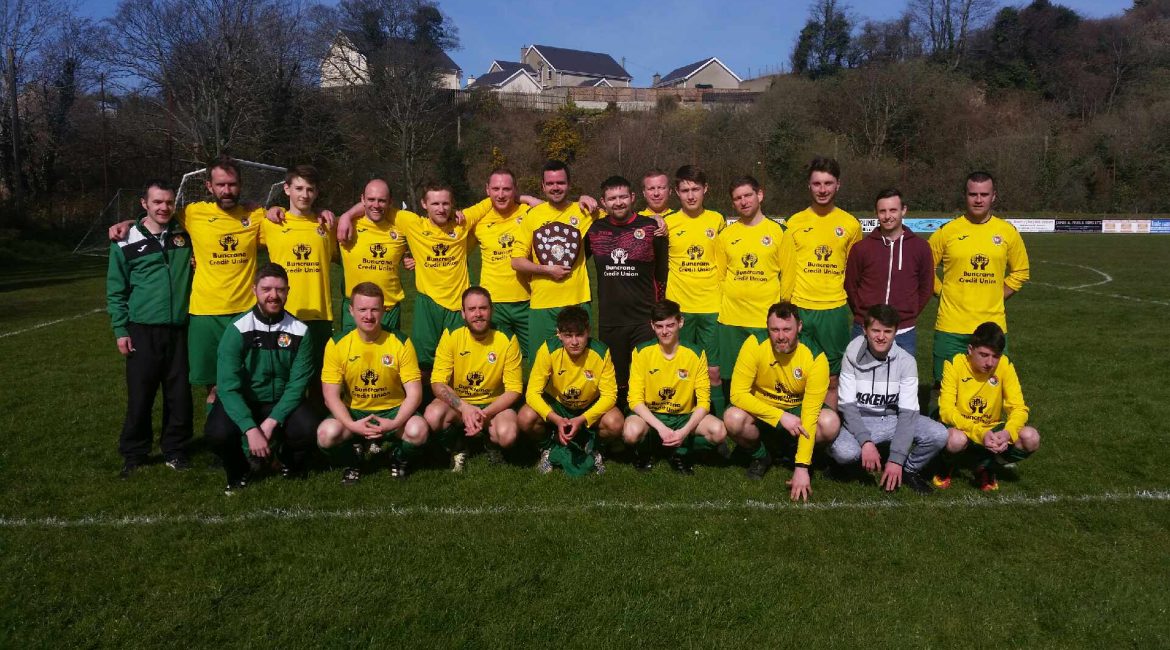 This match was switched to Moville where the home side created the first good opportunity on 8 mins after a cagey opening when Colm Doherty shot over the top from the edge of the box after some good build up play. Cockhill responded shortly after when a deep cross from Gary Breslin found Ryan Duffy free at the back post but his effort on goal went just wide. Midway through the first half Moville again threatened, this time PJ Barr testing Gary Robinson in the Cockhill goal but the Cockhill keeper saved well. Duffy again was unlucky not to give Cockhill the lead when he shot narrowly wide after being played in by Lee Carey. After some more chances for both sides good play by Pearse Doherty set up Ryan McColgan who had a great chance but headed wide. Moville had the ball in the net shortly after this. Graeme Doherty hit the bar with a good effort from 20 yards and Adam Harkin stuck away the rebound but from an offside position. It was Cockhill who had the next chance and finally broke the deadlock. Declan Kearney crossed in a great ball from a free kick which was only partially cleared but landed at the feet of Gary Breslin who made no mistake from 12 yards to put Cockhill 1 up with finely hit strike past Pauric Carey Doherty in the Moville goal. Moville almost levelled before half-time when a shot on goal from Pearse Doherty clipped the top of the bar. The home side started the second half well and Robinson made a great save from Mc Colgan. There was not too many clear cut chances during a scrappy start to the second half until on the hour mark Declan Kearney ran on to a great through pass by Duffy. He was fouled in the box and pulled himself up to score from the spot to give Cockhill a 2 – 0 lead. Moville got themselves right back in the match within 2 minutes. A long ball forward was knocked on and Pearse Doherty who made a good run was on the end of it to slot home from just inside the box. There followed a long stoppage after Cockhill’s Andy McElhinney received a nasty would to his mouth and had to substituted. Moville started the brigher of the 2 sides after the stoppage and their long forward ball were causing the Cockhill defence some problems. However it was Cockhill who almost scored next when Moville keeper, Pauric made good stop at the feet of Lee Carey when through one on one. Moville almost equalised when an effort from Barr spun high in the box but was cleared off the line by Duffy. They eventually equalised when Shaun McDaid was judged to have fouled Moville’s Ryan Killen in the box and Pearse Doherty stepped up to slam the penalty home to make it 2 – 2.Cockhill almost found a late winner when good work between Jude Mullan created a chance for Lee Carey but the Moville keeper made a good stop and the match ended in a draw.