Reserves with first win of the new campaign 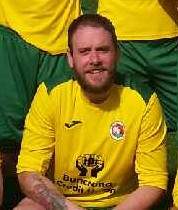 Carrowmena were first to show on 12 minutes when Gerard Gill fired a twenty five yards free just wide before Samuel Bredin fired straight at Gary Robinson when well placed. At the other end Adam McLaughlin failed to hit the target after a free broke to him inside the area. Cockhill got on top and Alan Fletcher fired wide from a good position before heading over from a corner and finally Taylor Doherty lifted a rebound high over the bar after home keeper Mark Doherty had parried well. The home side responded and a crossfield James McDermott pass found Bredin, but Robinson advanced to smother. Cockhill took the lead on 38 minutes after a superb Lee Carey through ball released Gary Breslin (pictured) to fire past Doherty from fifteen yards. The home side had the final chance of the half but Bredin fired straight at Robinson. Carrowmena got back on terms minutes after the resumption when Oran McDermott unleashed a powerful twenty five yard left footed effort which flew into the bottom corner. McDermott then went close again midway through the half when he fired over from a good position. Cockhill rallied and regained the lead on 84 minutes after an Adam Mclaughlin effort took a wicked deflection and looped over the top of keeper Doherty. With Carrowmena pushing in the closing stages they lost possession allowing Declan Kearney to release Patrick McLaughlin and he fired low to the corner