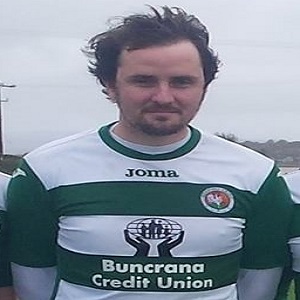 On 5 minutes a Mark McDaid cross found Michael Owen Doherty who fired over from six yards before a Michael Noone cross finds Doherty who again heads over from twelve yards. Darragh McDermott then saw an effort hit the post with Mark Doherty completing the clearance. The pressure told on 18 minutes when Shay McLaughlin beats a defender and squared for Kevin McDaid (pictured) to shoot low past Glen Watson from the edge of the area. Cockhill increased their lead when Mark McDaid fired high past Watson after being set up by Doherty. Watson then denied Doherty with a superb tip over save. Rovers first chance came on 42 minutes but Mark Doherty’s free went well wide. Rovers came more into the game in the second period with substitute Garvan Doherty firing just over from distance on the hour. The visitors did get a goal back on 63 minutes when Keelan Doherty intercepted a poor back pass and rounded Declan Caldwell to slot home. On 80 minutes Doherty headed a Jack McDaid cross just over for the home side. Rovers pressed and in the final minute a Mark Doherty deep ball just eluded Gary Doherty