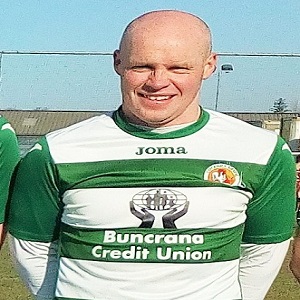 Ulster Senior League
Cockhill Celtic FC – 3 (OG, J Bradley & G Gill)
Fanad United – 2 (McMenamin & McNamee)
Report by C McDaid
After a frenetic opening, Cockhill had the first chance on 8mins when good interplay between Gerry Gill and Malachy McDermott released James Bradley but after hesitating, the chance was gone.
Cockhill took the lead on 26mins when Paul McDermott’s cross was diverted to his own net by Sean McElwaine.
Cockhill were buoyed by this goal and added a second on 31mins when a Ryan Varma cross was brilliantly headed home by James Bradley.
Against the run of play, Fanad reduced the deficit on 43mins when Tony NcNamee’s free kick was spilled by Lee McCarron and Oisin McMenamin was alert to slot home.
Fanad started the second half in the ascendency with Davitt Walsh having a speculative effort saved by McCarron. They spurned a great chance to equalise on 49mins when Jordan Toland found space on the right side of the penalty area but shot straight at McCarron.
This let off saw a reaction from Cockhill. Mark Moran was unlucky when a deflected effort went narrowly wide on 52mins before they got a controversial third goal on 60mins.
James Bradley played in Laurence Toland whose shot was saved by Shane Graham. Toland was first to the rebound but was forced wide. His cross shot finding Gerry Gill whose shot was adjudged to be over the line by a well-placed assistant referee, despite furious Fanad protests.
The game was ending to end now with Fanad pushing and Cockhill prepared to sit deep and counter attack. Fanad had a great chance on 71mins when another McNamee free kick found the unmarked Sean McElwaine who headed over the bar.
They did reduce the arrears on 85mins when a shot was deflected into the path of McNamee who calmly fired past McCarron from 12yds.
In the end, Cockhill held on to claim all 3 points from what was an absorbing encounter.