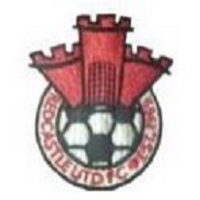 Hannon Greene Insurances Fr. O’Gara Cup Preliminary Round
Redcastle United – 10
Cockhill Celtic Reserves – 2
Redcastle signalled their intent straight from the kick off Aarron Nash hit the cross bar and Jack McConalogue hit the right hand side post. On 20 minutes Ethan Canning on the left wing crossed for Aarron Nash to head the ball down to Jack McConalougue who fired past Gary Robinson from six yards. They doubled their lead on 26 minutes after Darragh McConway picked up the ball and fed Aarron Nash who passes to Denim McLaughlen to shoot low past Robinson. Six minutes later it became three when Canning beats a defender and crossed for Gavin Grant to fire home. The visitors reduced the deficit after home keeper Michael McCole failed to hold Mark Gillespie’s cross allowing Gary Breslin to pounce and drill home. The home side responded and when Robinson parried Nash’s effort the loose ball fell to Cahir McLaughlin who made no mistake. They then made it five one before the interval when Canning crosses for Nash to control on his chest, swivel, and fire to the top corner. Further goals from Shaun Curran Ethan Canning(2)Denim McLaughlin and one goal from cockhills Mark Gillespies completed the scoring in the second period.