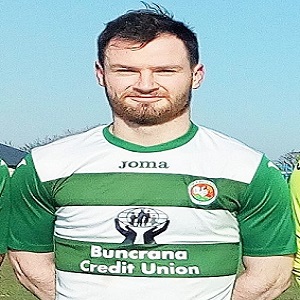 Cockhill Celtic FC – 2 (P Doherty & L Toland)
Finn Harps Reserves – 1 (A Duffy)
Cockhill had the first chance on 2mins when Ryan Varma broke the offside trap but his shot hit the side netting from a difficult angle. The game was open at this stage and Harps had the next chance when Adam Duffy went on a run down the left. Lee McCarron got a hand to Duffy’s cross deflecting it from the onrushing James Carolan.
Indeed it was Harps who went in front on 25mins. A cross from the left found its way to Carolan on the right. His scuffed shot was rifled to the top corner by Duffy, giving McCarron no chance.
Cockhill almost replied immediately but Toland’s shot was tipped onto the post by Bell and the rebound had no takers.
They were out of luck again 2mins later when Gerry Gill hit the same post with a long range effort.
The pressure from the home side was building and it was no surprise when they equalised on 40mins, a Gill corner headed low to the corner by Peter Doherty (pictured).
This goal spurred Cockhill and they opened the second half in the same vein. They took the lead in similar fashion on 50mins when another Gill corner was flicked expertly home by Laurence Toland’s near post header.
Cockhill were well on top now and were denied a third goal by a fine save from Bell. He reacted well to push away a Gill shot who found space on the edge of the box after good interplay between Toland and James Bradley.
Harps gradually got on top midway through the second half but their best chance to equalise was thwarted by McCarron. After hesitation in the Cockhill defence, Stephen Doherty latched onto the ball. He drove forward and hit a low shot from the edge of the box which McCarron brilliantly turned away for a corner.
After this scare, Cockhill closed out the game with the minimum of fuss to reach another semi-final.