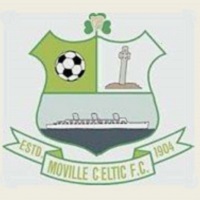 Inishowen Engineering Division Two A
Moville Celtic Res – 4 (P Doherty, N Doherty, Lafferty & Harkin)
Cockhill Celtic Res – 1 (M Gillespie)
In the 5th minute an error in the home defence allowed Mark Gillespie to fire low past Puaric Carey-Doherty from close range to give the visitors the lead . The home side replied with Pearse Doherty crossing for Michael Grimley to head over at the back post just before the interval. Moville dominated the second period and on 52 minutes Doherty cut in and saw his effort saved by Ryan Fitzpatrick. Moville continued to press and Ryan McColagn saw his effort crash off the bar before on the hour Adam Harkin fired wide from ten yards when well placed. Minutes later Conor Lafferty also failed to hit the target. Moville levelled the game on 68 minutes after Doherty cut inside from the right and fired past Fitzpatrick from fifteen yards. They then took the lead minutes later after Noel Doherty despatched a twenty yards effort to the bottom corner. More pressure ended with Conor Lafferty getting on the end of a McColgan cross to sidefoot home from eight yards. Lafferty then released Harkin who raced clear and lobbed the advancing keeper.